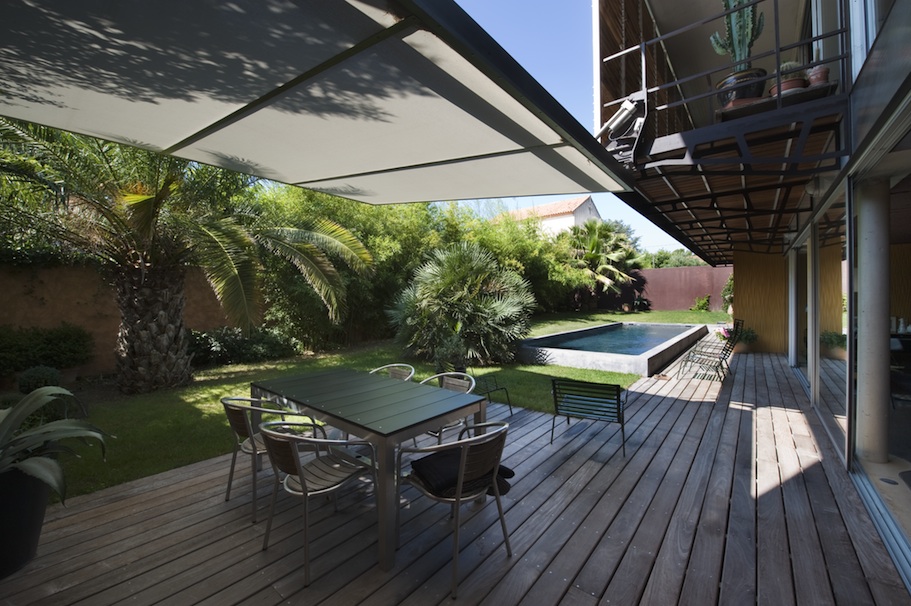 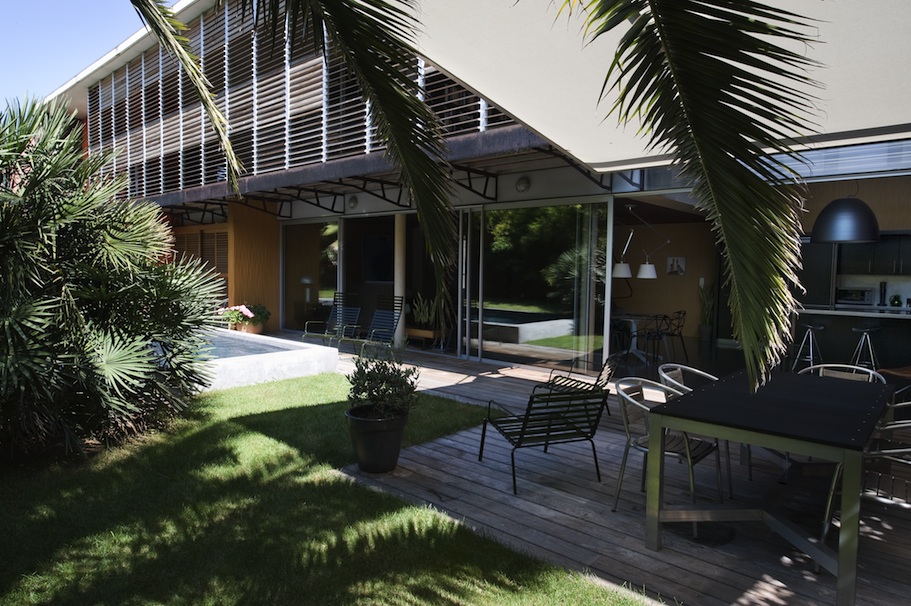 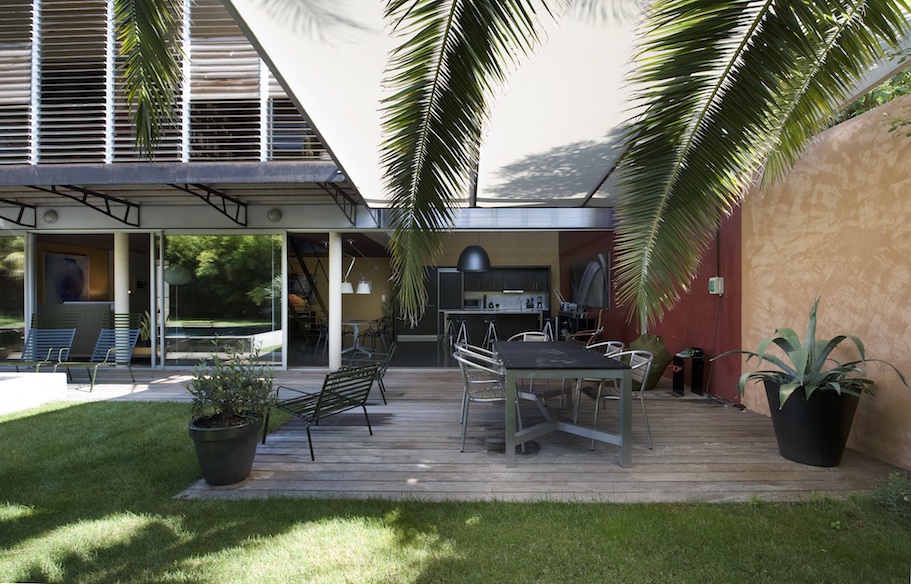 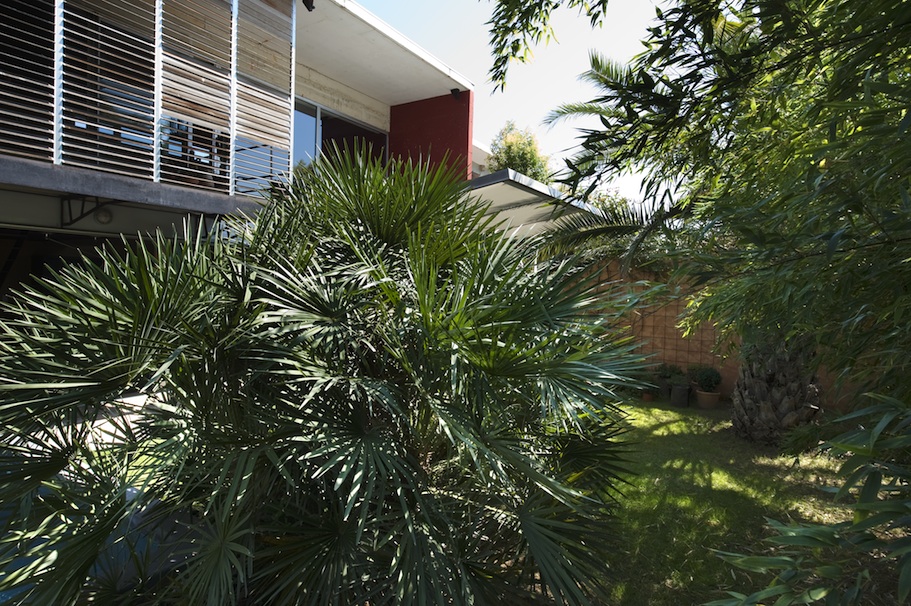 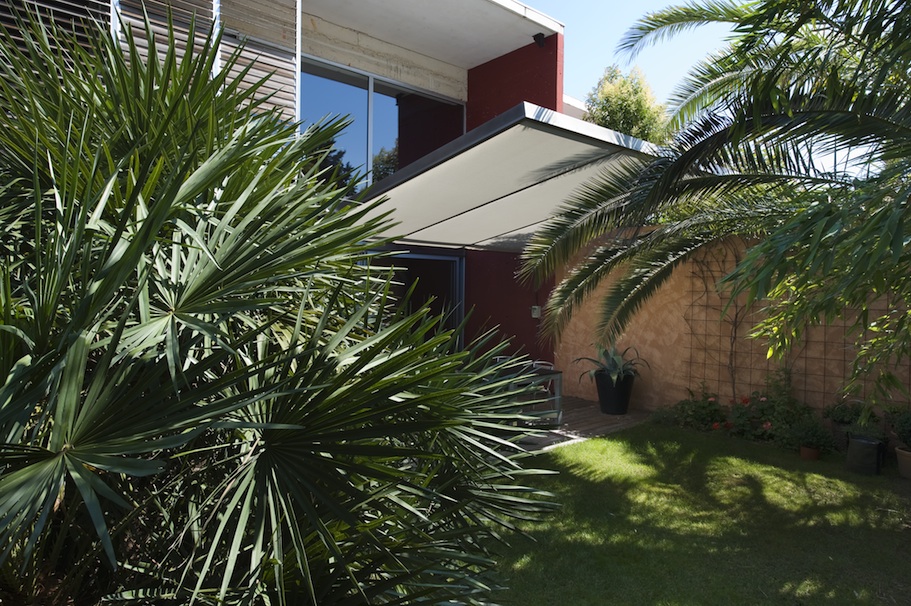 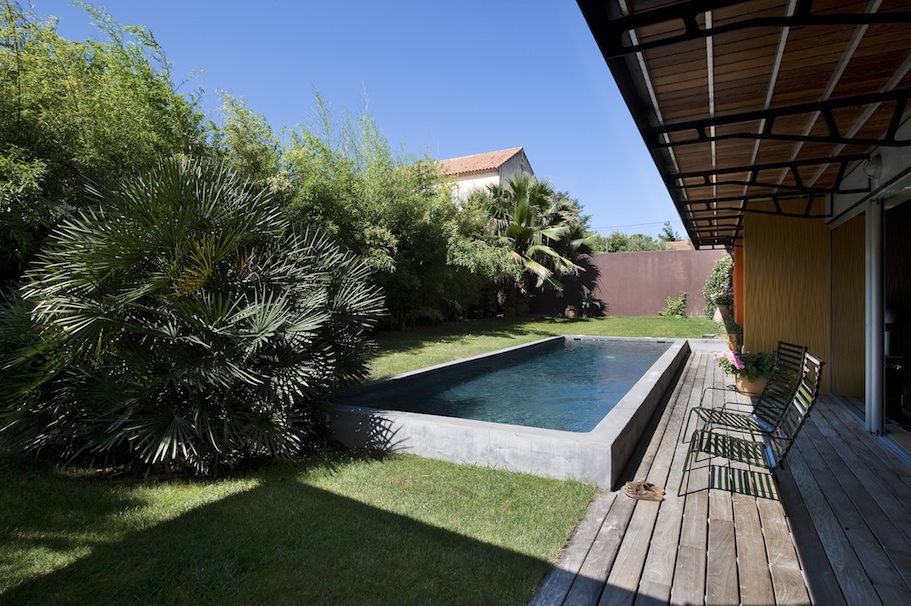 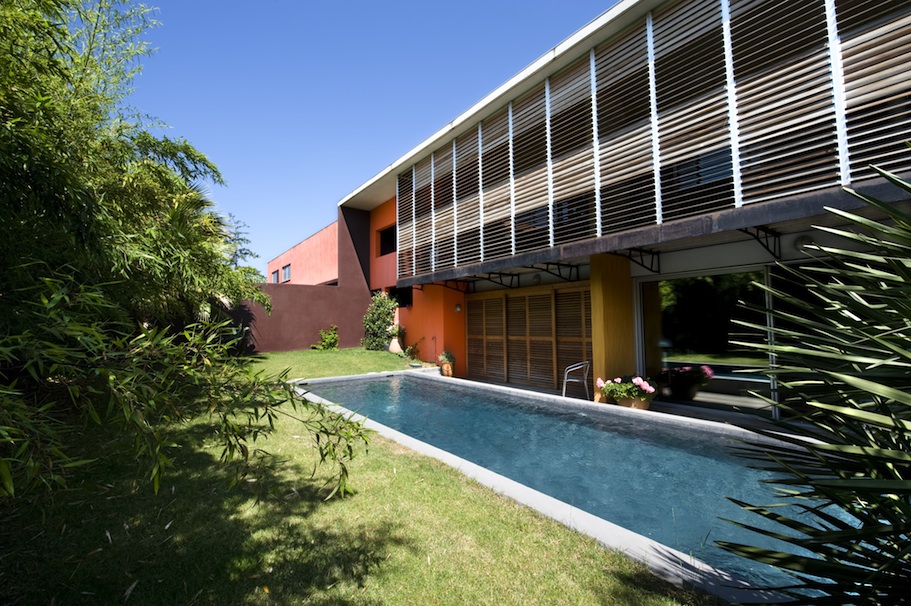 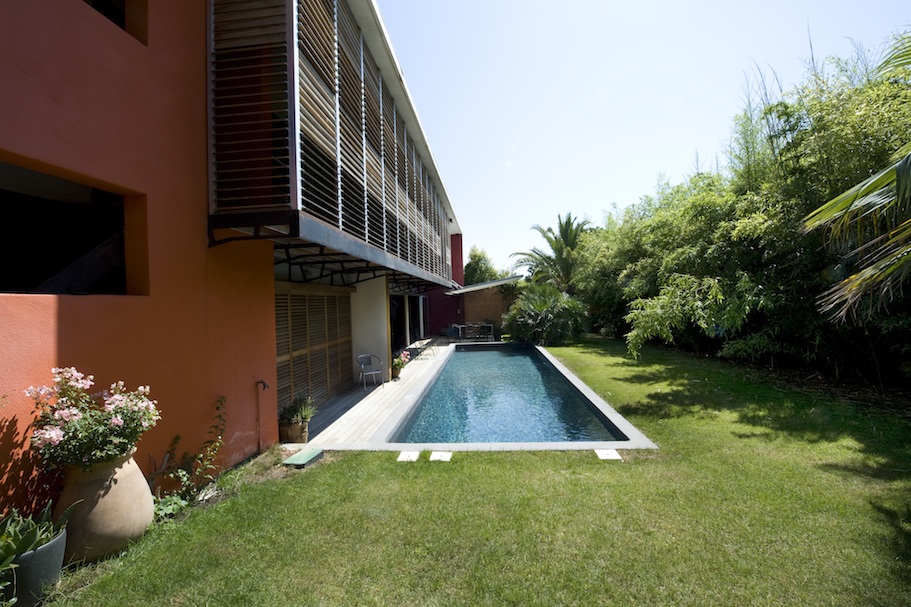 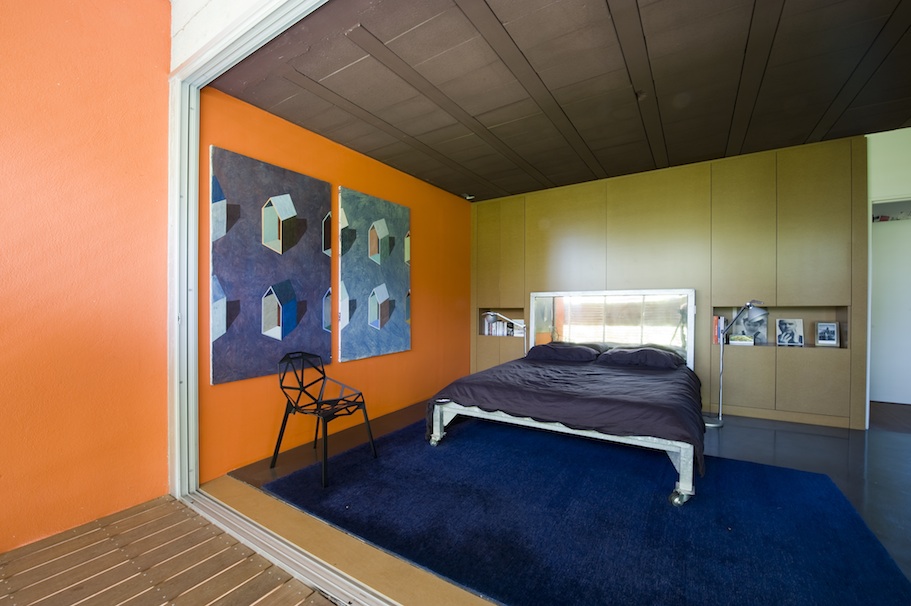 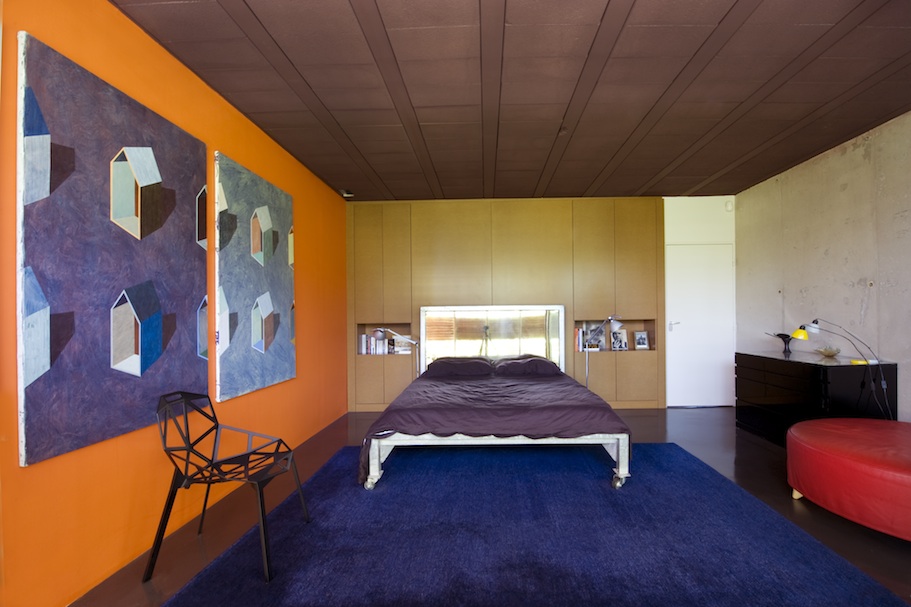 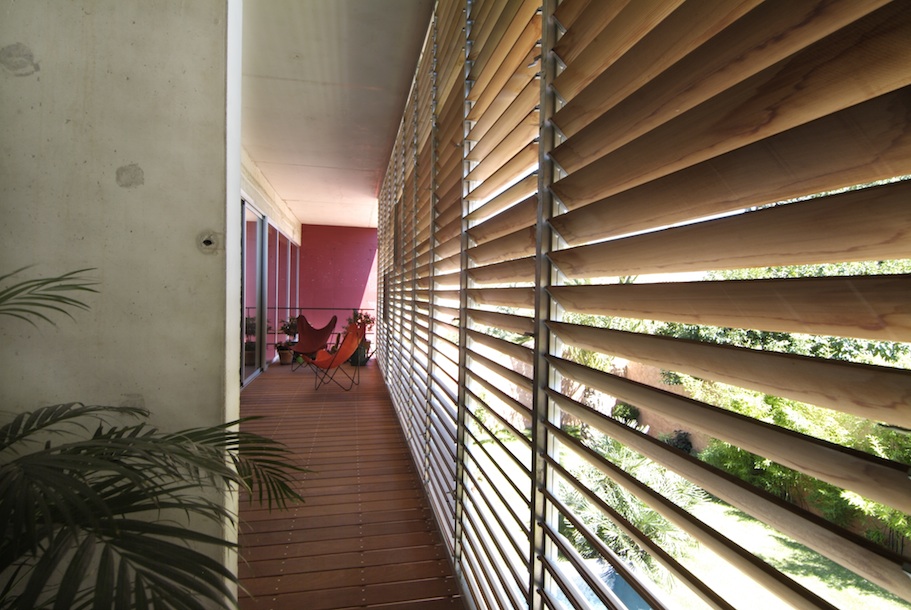 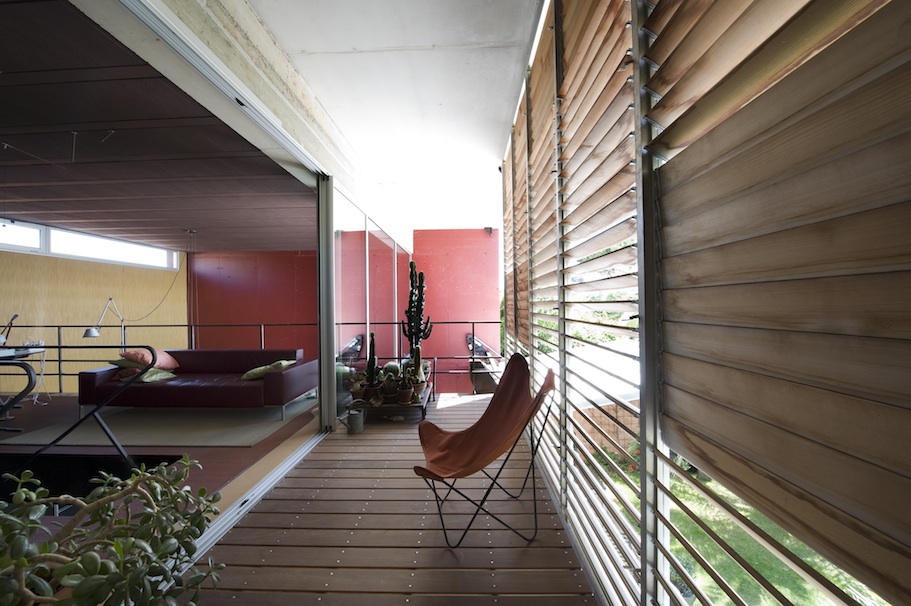 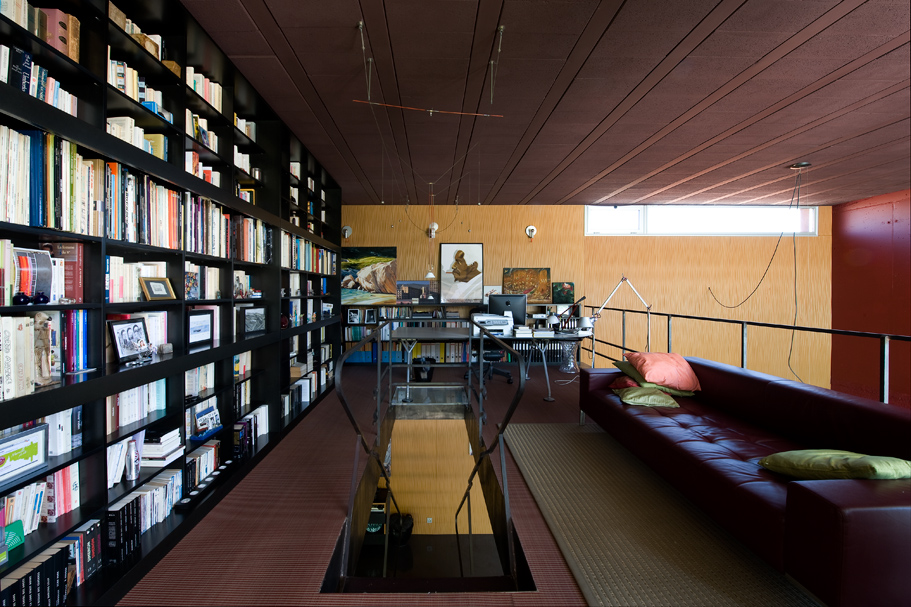 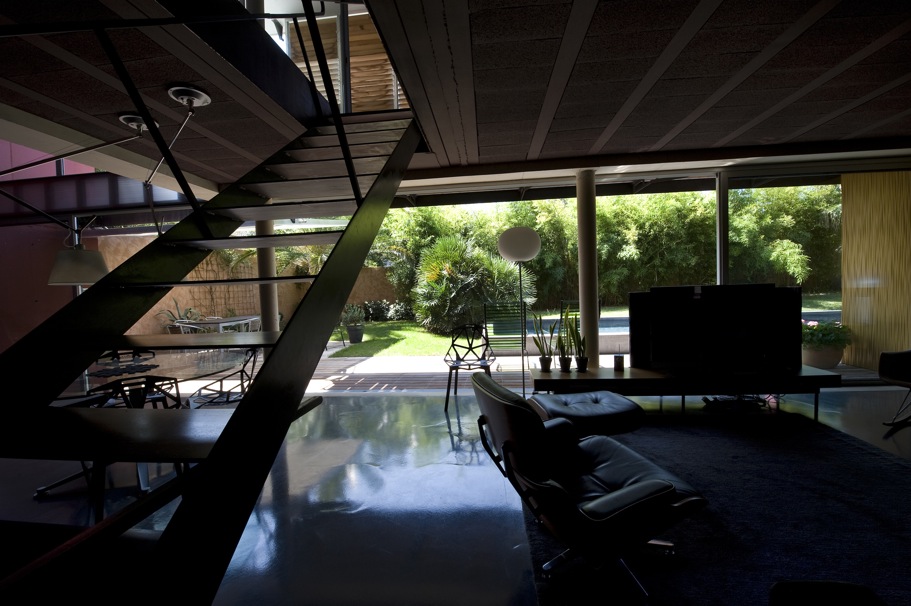 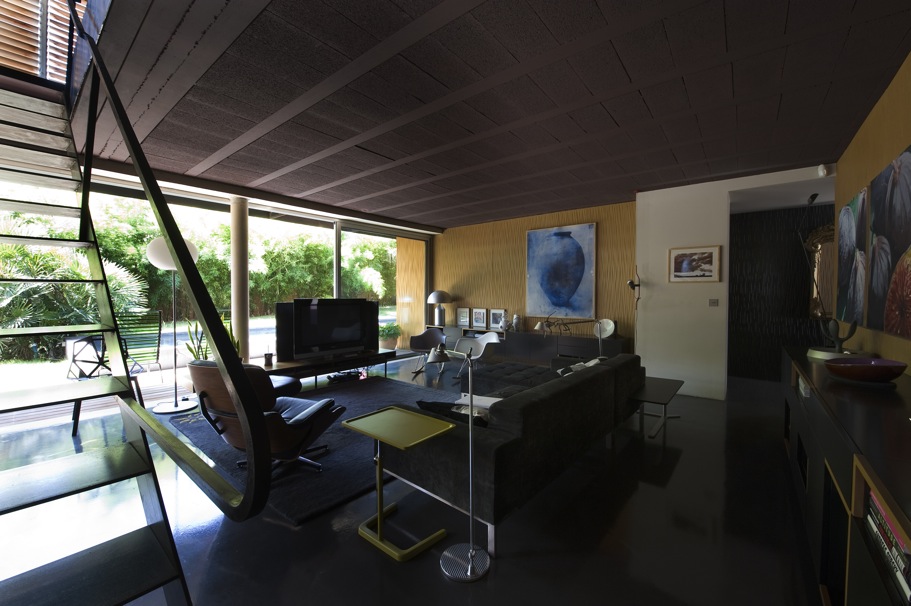 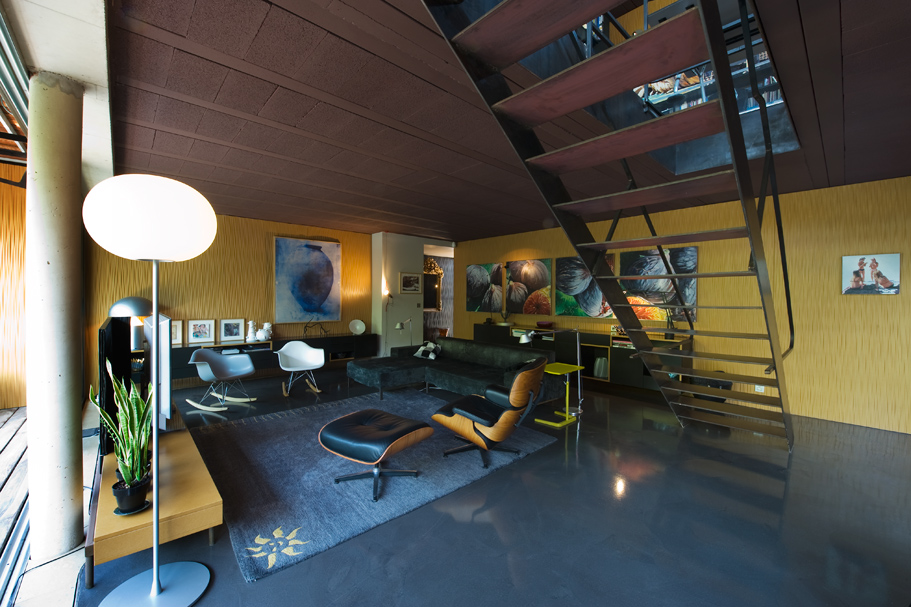 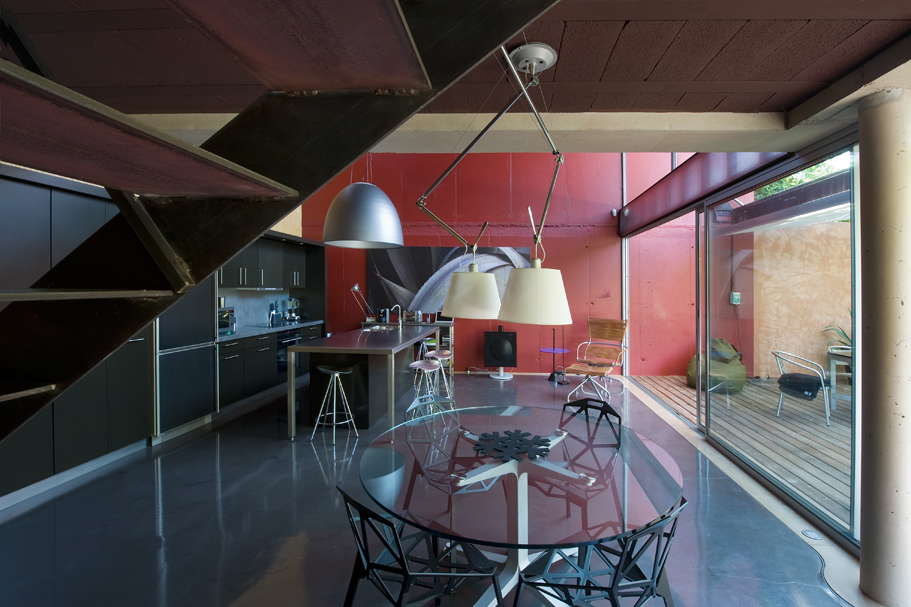 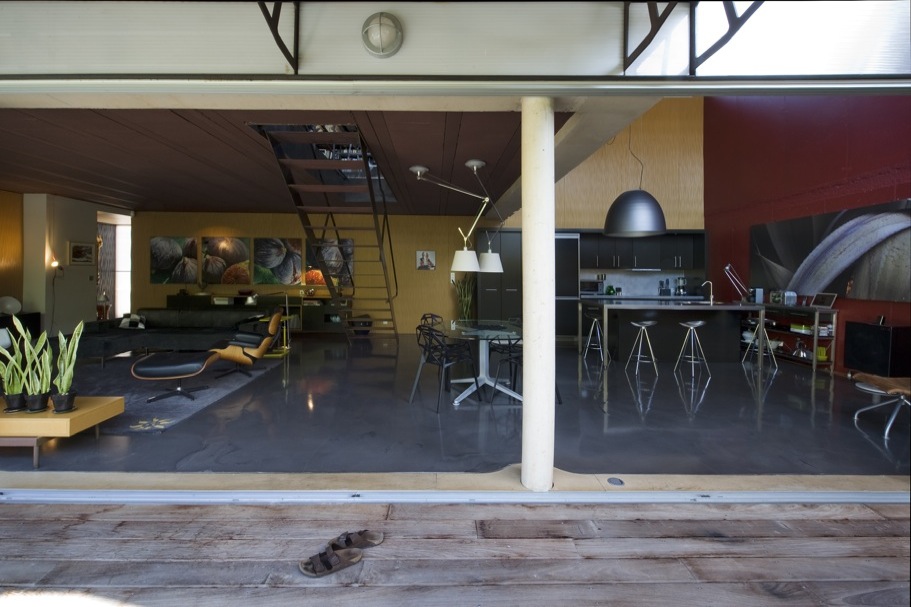 On a 100-by-20-meters site served by a lane at each end, a building strip with a margin of 6 meters was implanted on two levels between a pathway to the North and a planting strip to the South. The building strip was divided in four equal 25-meters-long segments. This house adjoins two of the four houses. The north wall is only pierced with the main entrance and the openings for the shower room and the laundry room. The south wall is only bay-windows. A cantilevered concrete slab, a partition of fixed shutters with directional slats and an adjustable screen of cloth protect this wall from the sun's effulgence. The partition of shutters is equipped with Naco gears and red cedar slats. The motorised screen of Ferrari micro-perforated cloth and aluminium was developped, realised and installed by Sarragala. Each of the main rooms has a partition to the south. Raw materials have been favoured to the detriment of linings and other false-ceilings. Each surface is strongly coloured and white is almost nil as it is rendered useless by the bay-windows' share of light.

On the flat roof of the two central houses, a 64m≤ surface of solar panels lavishes the water necessary for the four houses' underfloor heating, provides for the sanitary needs and also warms up the four houses' pool water during the intermediate seasons. The global fittings were grouped together under this house in a boiler room that also shelters the filtration systems of the four swimming pools. An electronic regulation organises the relay between the solar system and a gas boiler.

The kitchen, all in medium density fibreboard and brushed stainless steel was entirely designed for the project. The lamp Nur of Ernesto Gismondi's is suspended above the ait-booth completed by Pepe Cortes' Jamaïca stools for Amat3. Against the red façade that carries on to the terrace, a giant picture from Guy Bargin, the sound of Geneva Sound's XL, Achille Castiglioni's Servo Muto enlightened by Joan Gaspar's Ledpipe for Marset and Gatti-Paolini's Sacco for Zanotta. Konstantin Grcic's black Chair One surrounds the Roberto Barbieri (Zanotta) Radice table which is enlightened by Michele de Lucchi's Tolomeo for Artemide. Emaf Progetti's Alfa for Zanotta comes with Charles and Ray Eames's Lounge Chair and Rars (Vitra). Above the line of black mdf, hung up on the gouged natural mdf panel, a series of Françoise Bargin, painter in Marseilles, is enlightened by Richard Sapper's Tizio (Artemide) and Tommaso Cimini's Daphine (Lumina) and goes alongside a beach scene by Benjamin Chasselon, another massaliote. To light the living space : Jasper Morrison's floorlamp Glo-ball in Murano glass (Flos), Achille Castiglioni's suspended Parentesi (Flos) and Vico Magistretti's Atollo (Oluce), put on a black mdf storage box. Ingo Maurer's Ya Ya Oh system sheds light on the crude steel stairs' hopper. A desk from the Nomos series designed by Norman Foster for Tecno is completed by the Aeron chair by Herman Miller. 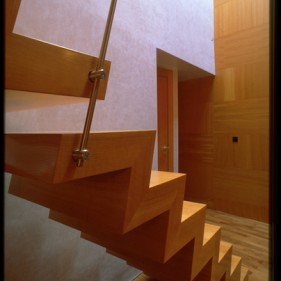 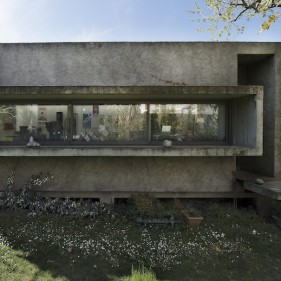 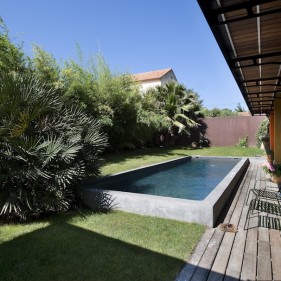 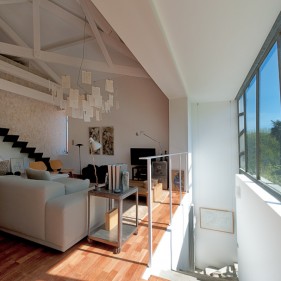 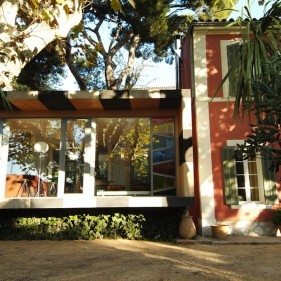 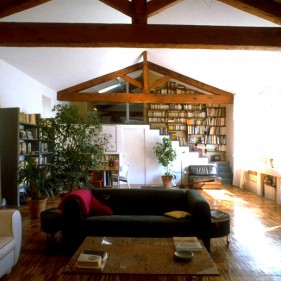 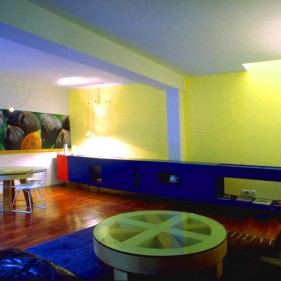 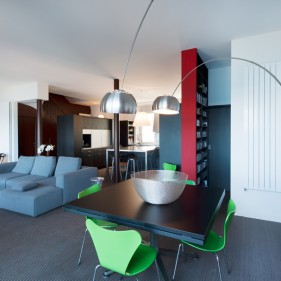 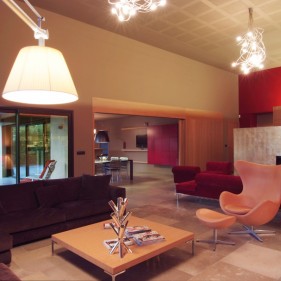 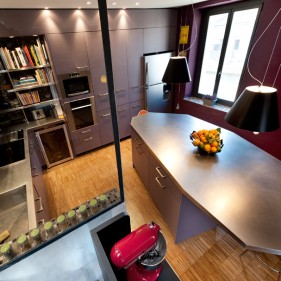